Skip to content
Where do we go from here, now that all of the children are growing up?And how do we spend our lives, if there’s no one to lend us a hand?  — Alan Parsons Project, ‘Games People Play’

Lady Gwenllian LeStrange-Tudor, by happenstance, sees the prodigal professor’s Thesaurus of Games on his desk in the study.

Gwenllian smiles because the professor has never been married. He rarely attends parties, and…

Her thoughts are interrupted by the King of Diamonds living playing card who peers through the stained glass window of the study.

“I don’t wanna live here no more, I don’t wanna stay. Ain’t gonna spend the rest of my life quietly fading away,” he says.

She thinks it odd because the King of Diamonds doesn’t live on the island unless he is one of the homeless hipsters picking coconuts off trees.

A magical harpist teleports the Alan Parsons Project to the castle grounds.

Games people play, you take it or you leave itThings that they say are not rightIf I promise you the moon and the stars, would you believe it?

Lady Gwenllian beckons her Butler to usher in the king but the Butler gets lost in one of the long corridors. She would issue a “Butler Alert,” but knows he likely fell asleep on the red sofa in the ballroom after doing a half-ass job at cleaning, shopping, landscaping, cooking and dressing the Lady.

“You are wearing mismatched slippers,” says the King of Diamonds waiting patiently at the portcullis gate. She struggles with the heavy chains to lift the metal gate that replaces the red double entrydoors.

“Where do we go from here, now that all of the children have grown up?” he asks. “And how do we spend our time knowing nobody gives us a damn?”

Lady Tudor observes the King of Diamonds card transmute into a young adult version of the Hermit tarot card.

The young adult Hermit raps in psychobabble. And, she hears, “Where do I go from here, now that all of my parents won’t grow up? And, how do I spend my time, knowing nobody gives me a chance?” 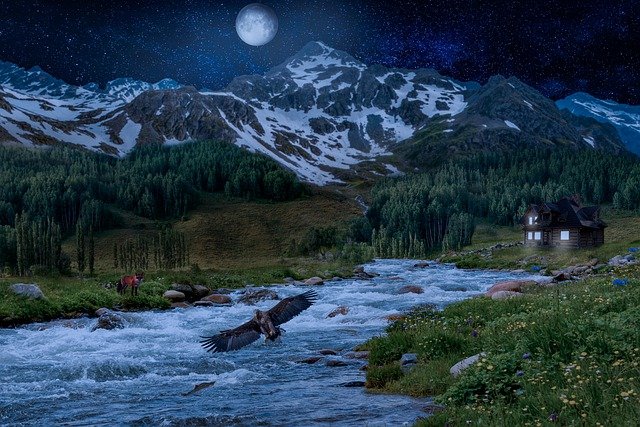 The Hermit card stands tall. Then a strange weather aberration causes the card to float out the window until she sees the Hermit hovering at the highest peak of the distant mountain. So close to the moon and the stars that they appear to be his to give or take away.

She hopes that one day there will be a cataclysmic shift in the heavens — and the Hermit will come down from his snow-capped mountain to bring her peace.

For now, though, the Hermit of the sign of Virgo, keeps peace in his own possession. And she wonders if this dream is just a cruel game her mind plays in the middle of the night.

Games people play, you take it, or you leave itThings that they say, just don’t make it rightIf I’m telling you the truth right now, do you believe it?Games people play in the middle of the night.

Posted on September 26, 2022September 26, 2022 Author Contributor
It’s a one time thing It just happens A lot. — Suzanne Vega, ‘Cracking’ Lady Gwenllian LeStrange-Tudor of the 12th House on the island reconciles herself to the fact that her energy is too drained to temper the storm gods’ tantrums. Seeing how everything is made in China, the Lady feels a splitting headache coming […]
Fantasy Introduction

Wounded Healer & the Knight of Swords in the 11th House

Posted on September 25, 2022September 25, 2022 Author Contributor
I like that you’re broken, broken like meMaybe that makes me a foolI like that you’re lonely, lonely like meI could be lonely with you — ‘broken,’ lovelytheband Lady Gwenllian LeStrange-Tudor of the island’s 12th House uncovers a hand-blown decanter in her castle gardens that, surprisingly, didn’t get shattered by the weather gods. “Ah, you […]
Fantasy

Posted on September 23, 2022September 26, 2022 Author Contributor
Nobody can tell yaThere’s only one song worth singingThey may try and sell ya‘Cause it hangs them upTo see someone like you — ‘Make Your Own Kind of Music,’  Cass Elliot Lady Gwenllian follows her sleep-walking Butler man-machine — the one that has everyone steamed because he’s lackadaisical about far-reaching matters of consequence such as […]